I Know A Guy

Some of Our Hand Crafted Brews

Natalie (Natty) Light – Golden Ale
This Golden Ale was named after co-owner Nils Johnson’s daughter. Light in color but not in flavor, this ale is crisp and clean with a touch of sweetness.
4.8% ABV

8-Ender Amber – Red Ale – Other
This hoppy amber ale was brewed for our friends at the Norfolk Curling Club. Malty with a touch of bitterness, and at 6.5% it will keep you warm near the ice!
6.5% ABV

Squire’s Tavern Ale – Old Ale
A hand crafted colonial beer inspired and enjoyed by our forefathers! Deep amber in color with a malty sweetness that will take you back.
6.6% ABV

Old School IPA – IPA – American
Remember your first IPA from the West Coast? This one will send your taste buds back in time – crisp and hoppy, just like the IPAs “back in the day”. Old school.
6% ABV

Little Red Seltzer – Hard Seltzer
A sparkling refresher!! Ask your server for the seltzer flavors of the day!
5.25% ABV 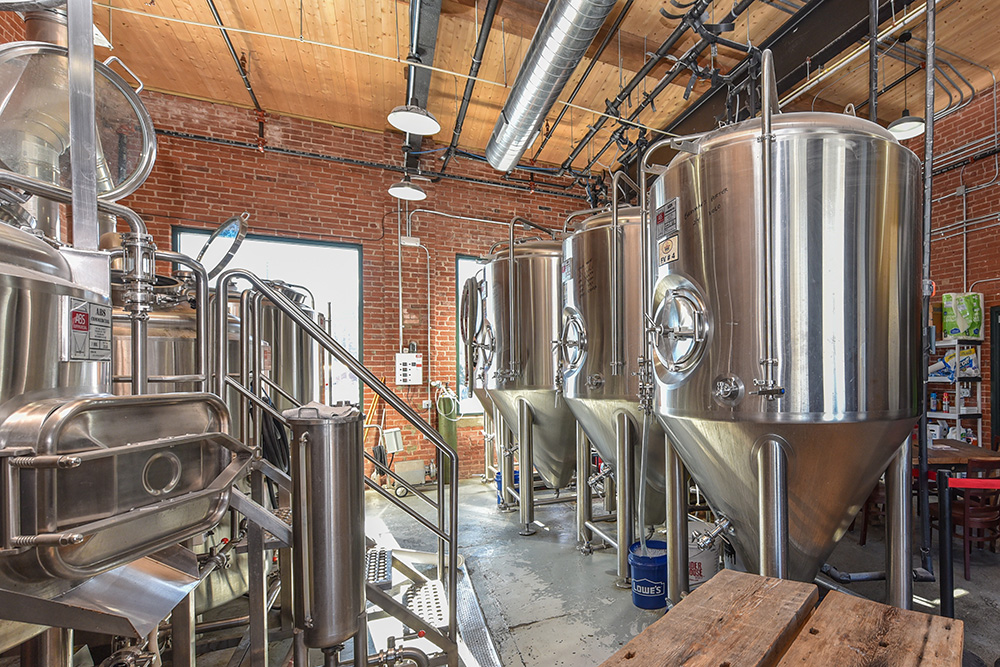 Suck It Up Buttercup – Stout – American
“Dark and sweet, this colab brew with our friends at Brassworks Brewing Co. is a chocolate peanut butter cup in a glass!” ABV 7.1%

Cream of the Crop – Cream Ale
This American beer is mild and smooth with almost no bitterness and a refreshing finish. Don’t settle for any Cream Ale, drink the Cream Of The Crop! ABV 5.5%

The Heifer – Wheat Beer – Hefeweizen
Drinks light and crisp with a hint of fruity banana! ABV 5.4%

Not Your “Norm”al IPA – IPA – Triple
Loaded with Columbus and Mosaic hops and clocking in at 10% this left coast style Triple IPA packs a punch! ABV 10%

Where it all Began

Little Red Barn Brewers is really a story about how two brothers and their high school friend worked on transforming their dreams into reality.  The Hop Brothers, Matt and Nate Day, have been friends since birth.  They caught the craft beer bug shortly after Matt received a Mr. Beer kit for Christmas.  Although the early beers would not stand up to their current standards, the pint-sized dreams began.  Shortly after getting a Mr. Beer kit, the Hop Brothers began brewing with Greg Hoffman, whose life experiences made him the ideal mentor for the gang.  Greg taught the brew crew the importance of precision, sanitation, documentation, passion, and perhaps the most important life lesson of them all, enjoy what you do, for our time on this rock is short.  It wasn’t tough to get Nils Johnson involved with the club – he was often heard proclaiming, “free beer, count me in”.  What he lacked in training, he more than made up for with his experienced taste buds.  The LRB quickly outgrew making their nectar on the kitchen stove; it was time for a new home.  Nils’s parents, Nils and Gail Johnson, donated the use of an old horse barn located in Barkhamsted, CT for this purpose.

On March 9, 2013, the brew crew produced their first batch of beer at the now historic Little Red Barn.  Without the Johnson’s generous donation, the brew crew’s dreams may not have been realized.  If you see them in the tap room, buy them a pint.  The Little Red Barn Brewers researched numerous towns in the Northwest Corner.  During the summer of 2017, the LRB selected 32 Lake Street, Winsted, CT as their future home.  They quickly realized the Little Red Barn Brewers LLC was not building their brewery, but rather the brewery belongs to the community.  The support of the community, businesses, and town hall has been overwhelming, and it’s exciting to be part of the revitalization of a once-prosperous town.  Winsted is more than just a town, it’s the gateway to both the Litchfield Hills and the Berkshires.  Little Red Barn Brewers LLC will be “Brewing up Good Times” in Winsted, CT starting March 2019. 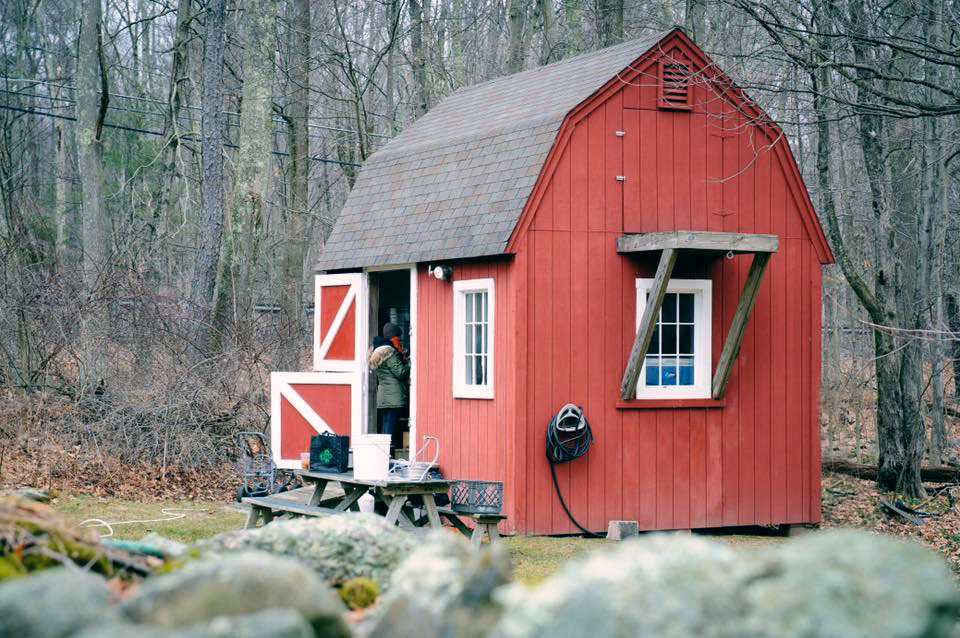 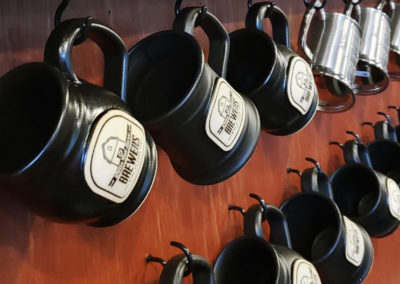 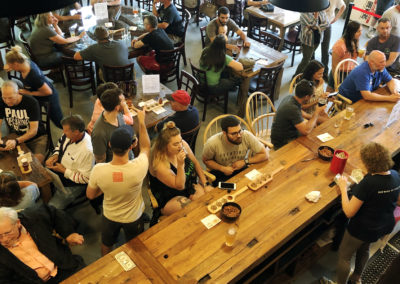 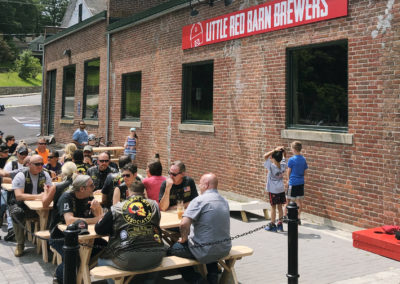 At any given time, 0.7% of the world population is drunk. It means 50 million people are drunk right now.
It’s beer thirty somewhere!

162,719 pints of Guinness beer are wasted each year due to mustaches. 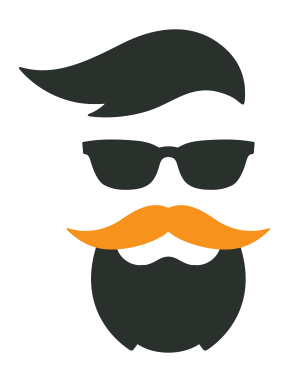 the fear of an empty beer glass.
Terrifying phobia indeed. 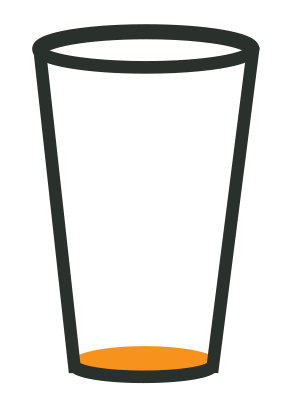 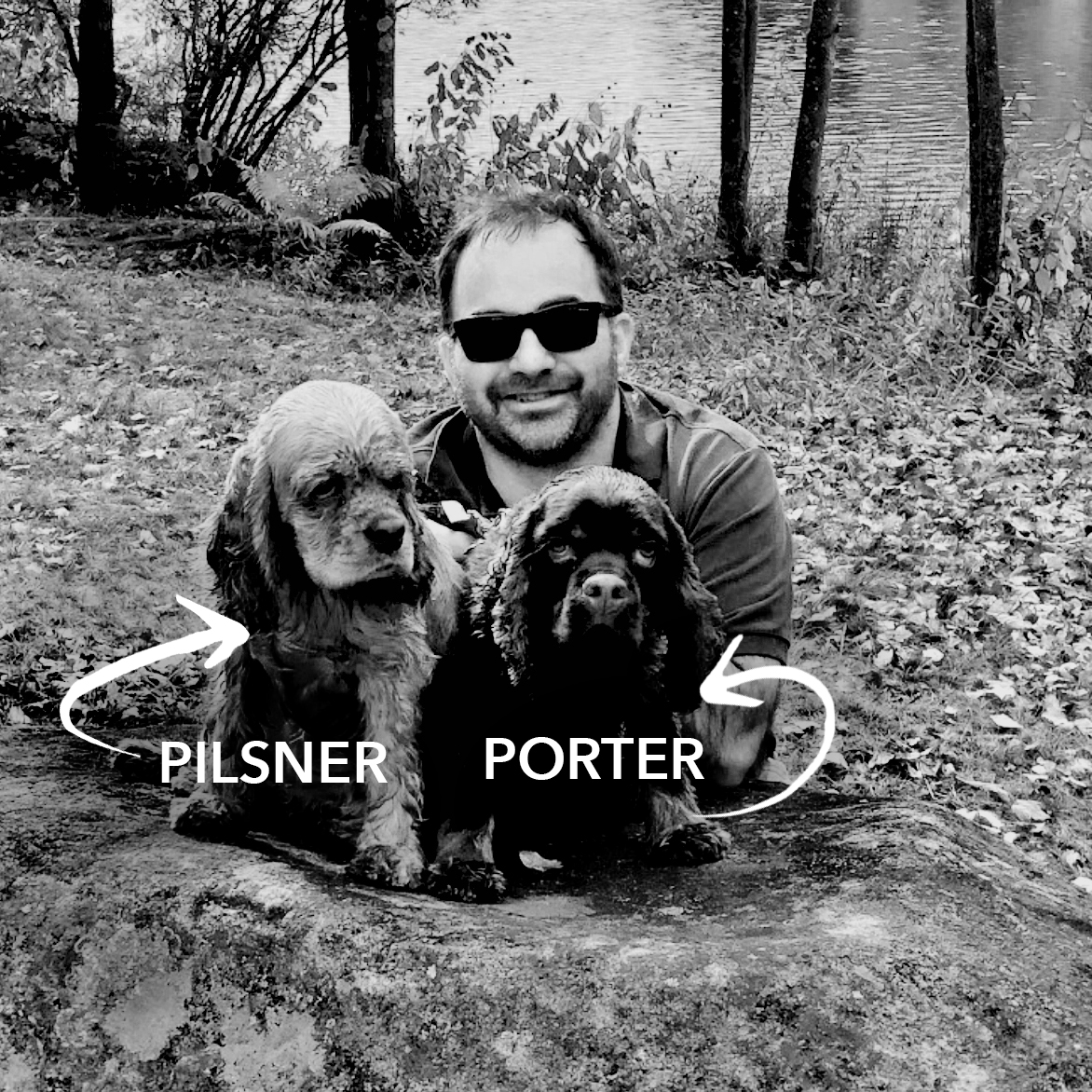 Nils caught the craft beer bug early in life.  It wasn’t because of its superior taste, it was out of necessity.  It’s legal to buy the ingredients for beer under the age of 21.  So in the interest of science, the ingredients were bought and the beer was made every three weeks during one summer break.

After those early experiences, Nils took a hiatus from beer.  He attended and graduated from Northwestern Community College and went on to have a 25-year career in transportation.  His first job, and one he held for 20 years, was working for Lippincott Van Lines, Winsted, CT.  Nils’s support for the community has been evident by his two decades of volunteering with a local fire department.

How did working in transportation prepare Nils for making beer?  The honest answer, not at all.  This is why the Hop Brothers are in charge of that.  The business side of beer, now that’s something his experience has prepared him for.  Throughout the years, he had to watch cash flows, interact with customers, write HR polices, route trucks, and has dealt with numerous federal and state agencies.  These skills will translate nicely into this venture.

Nils has often been associated with Beerman – many think he is this super hero.  Research has shown Nils often wears glasses and Beerman does not, so he has been eliminated as being the alter ego of the defender of Craft Beer. 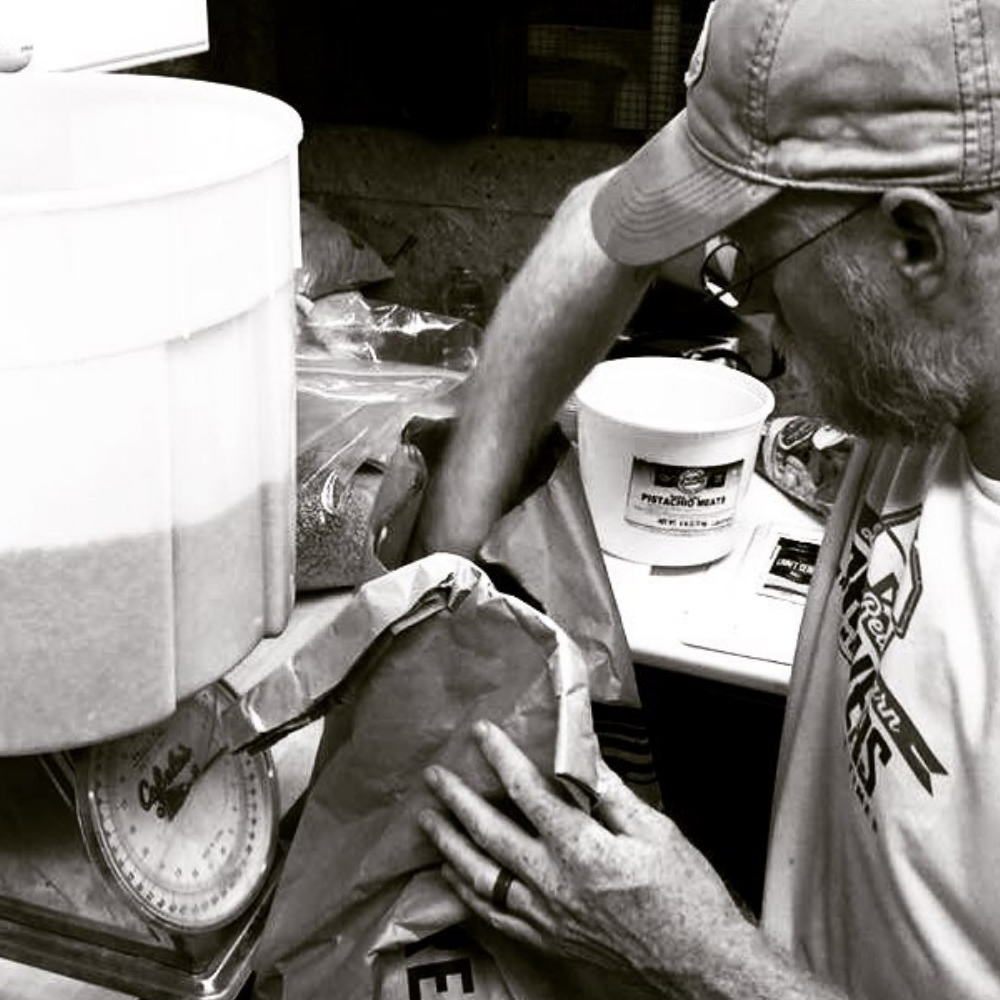 When Nathan’s brother got a Mr. Beer kit for Christmas, he invited Nate over for their first attempt at home brewing.  The seed was planted and the next month Nate got his own 5-gallon brewing kit.  After a few solo brews, he was thirsty for more knowledge.  Nate turned to his friend and bandmate, Greg Hoffman.  Greg was once an avid brewer of beer and, after conversing with Nate, his love and passion for brewing was rekindled.  It was at this time that Nate thought it would be a great idea to form a brew club as a way to foster their passions.  Under Greg’s tutelage, Nate began to learn how to build a beer and soon shifted his focus from crafting songs to crafting recipes.  Close friend Nils Johnson joined the club and they quickly outgrew Greg’s kitchen… they moved to the Little Red Barn and eventually made the decision to chase a dream.  Focused and determined since that day, the Brew Crew is close to realizing that dream. 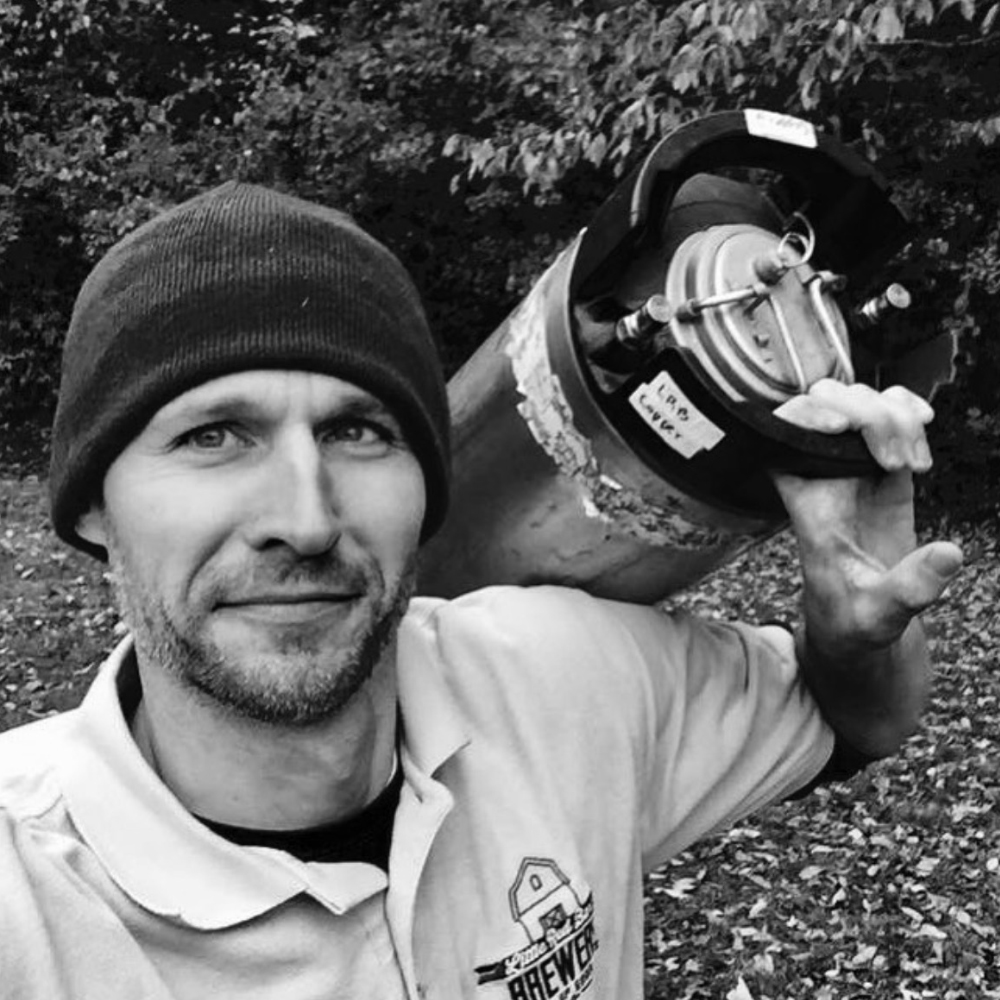 Matthew began brewing beer about 7 years ago after receiving a beer brewing kit from his wife for Christmas.  Brewing quickly became much more than a hobby as he and his brother (Head Brewer Nathan Day) quickly upgraded their equipment and began experimenting with the many varieties of craft beer.  For the past 2 years, Matt has been brewing at a feverish pace to keep up with the numerous private parties and events where the Little Red Barn Brewers have been sharing their brews.  Matt has been in charge of the Facebook, Instagram, and Twitter accounts for the brewery.  Matt also works in the IT department at The Hartford Insurance Co. where he has been for 20 years.

Be the Thirst to Know!

Subscribe to our e-newsletter for the latest LRB news.

PLEASE NOTE:
If our brew lot is full, there is additional parking on Meadow Street.

Learn more about the community
we support.  Click Here >> 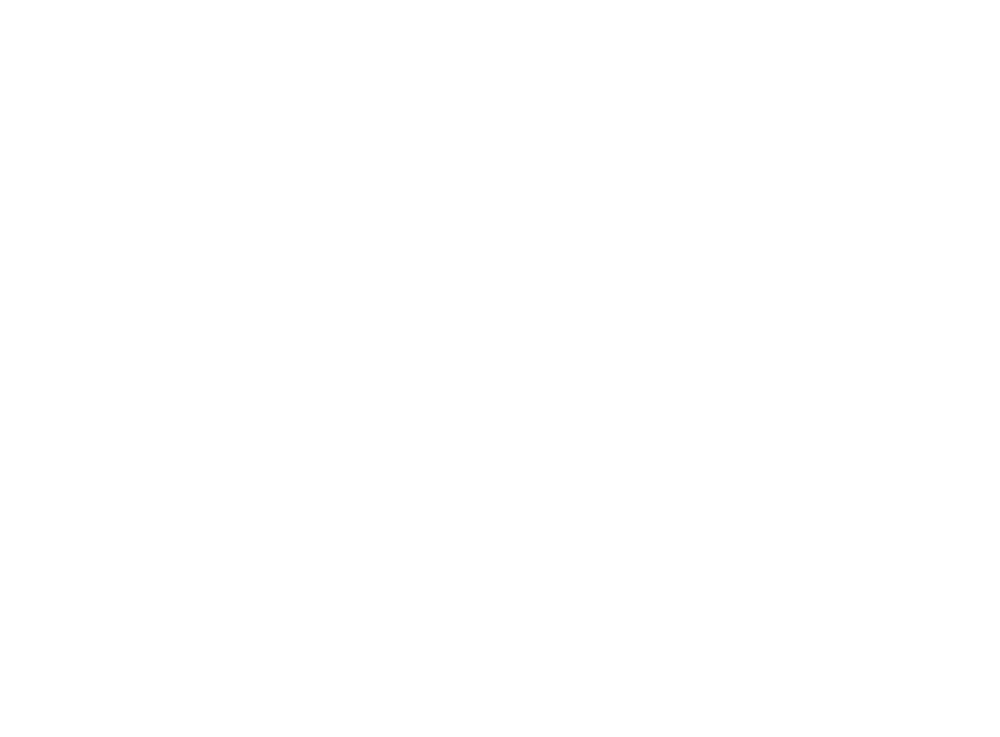