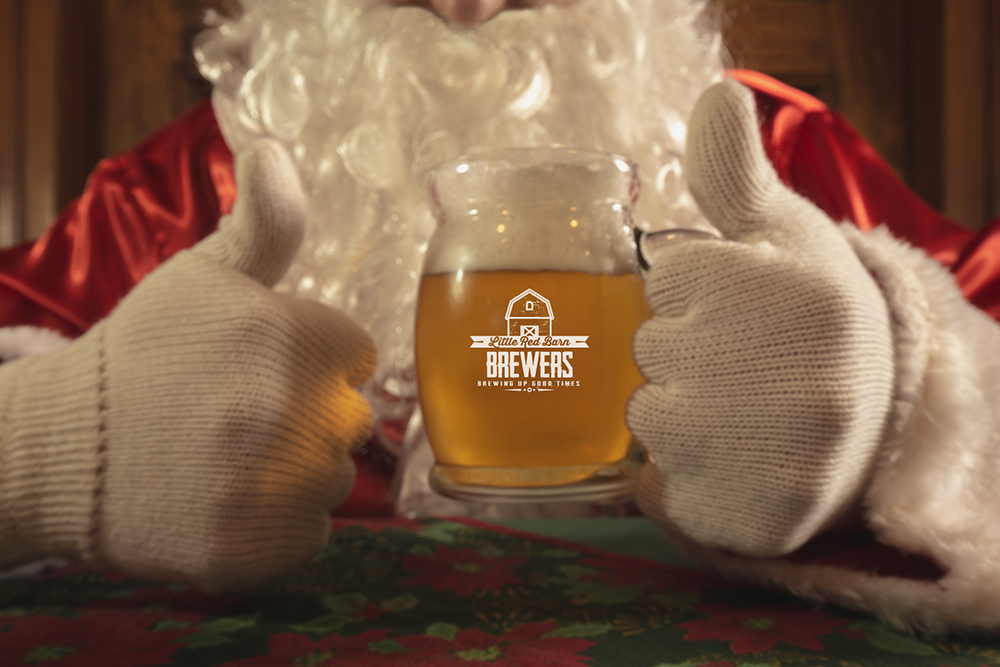 ‘Twas the night before Christmas, when all through the brew house,
Not a creature was stirring, not even that drunk mouse.
The pint glasses were hung by the fermenter with care,
In the hopes that Saint Beerman soon would be there.

The patrons were nestled all snug on their stools,
With pints of LRB brews making them all drool.
With Nate in his cap, and Matt with a hat,
They had just sat down for a long brewery chat.

When out in the parking lot there arose such a clatter,
Nate hobbled from his stool to see what was the matter.
Away to the window he flew like a man ready to brew,
Tore open the shutters and threw up his hash!

The moon on the breast of the shiny new steel
Gave the luster of metallic dreams to all the brewers with zeal.
When what to Nate’s wondering eyes should appear,
But a miniature beer sleigh, and eight tiny beer deer.

With a little old driver, so sluggish and clumsy,
He knew in a moment it must be Saint Beerman.
More rapid than beagles his coursers they came,
And he whistled, and shouted, and burped, and called them by name.

So up to the roof top the coursers they flew,
With a sleigh full of beers and plenty of beer gear too.
And let’s not forget Beerman was there too,
Straight from his battle with big beer in Kalamazoo.

And then Nate heard on the roof
The prancing and stumbling of each little hoof.
As he drew in his head, and was turning around,
Down the steam pipe Beerman came with stumbling sound.

His shirt was white, and his pants were black,
And his toweled cape was becoming unwrapped.
All his clothes were all tarnished with food and beer,
That were collected while spreading his beer cheer.
And a bundle of beer merchandise was flung over his back,
He looked like a drunk just opening his six pack.

His eyes were blood shot, his dimples how red!
His cheeks were like roses, his nose was so bright!
His droll little mouth was hung with a big old silly gin grin,
On his chin formed a beard from the foamed beer from the inn.

He had a 5 o’clock face and a small keg for a belly,
That made a sound like waves crashing on a beach covered in jelly.
He was drunk and plump, and a right jolly old man,
Nate laughed with delight at the sight of this hunk of man!
And when Beerman twisted his head, his eyes dilated and red,
Soon Nate knew he had nothing to dread.

He spoke not a legible word, but went straight to his work.
Beerman filled all the glasses and mumbled with glee,
“One for you, and one for me.”

Then he turned with a jerk, and fell to the floor,
Then he jumped up and looked for a door.
Beerman then pondered, does he have time for one more?
In his head he heard a voice proclaim, “This is Mrs. Beer, please don’t be lame.”
Time to go out then, the same way that you came.

It was then he knew there was only one thing he could do,
Holding up his middle finger in front of his face,
And giving a nod, up the steam pipe he raced.

He stumbled to his sleigh, to his beer deer he gave a whistle,
And away they all flew like the down on a thistle.
But they all heard him exclaim as he drove of out sight,
“Happy and Hoppy Christmas to all, and to all stay away from Bud Light!”

From the LRB family to yours, have an amazing holiday season!